When you were a kid, perhaps you locked yourself in the bathroom, turned out the lights, positioned yourself in front of the mirror and then turned on the lights to watch your pupils grow.  And if you’ve never done this, shame on you for not being curious.  Go do it.  Now.  Or maybe if you’re not the participatory type, you’ve noticed your cat lazing in the sunlight with her eyes narrowed down to nothing but vertical slits.  These are both examples of how an iris adjusts to control how much light enters an imaging device – in this case, a person’s (or animal’s) eye. 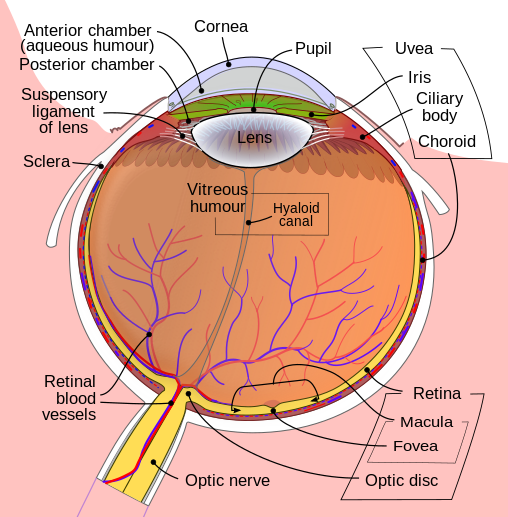 As shown in the diagram, the iris (the colored part of your eye) encircles the pupil.  The pigmentation in the iris prevents light from coming through, so light gets in only through the exposed part of the pupil.   The iris is connected to a muscle that controls its size.  When it is dark out, the iris pulls back, exposing more of the pupil.  When it’s bright, the iris relaxes and gets smaller, decreasing how much light comes in. You can think of the iris as a sort of restrictor plate for the eye.

There are limits to how big or how small the iris can get, which is why we simply can’t see when it’s really bright outside – then we use another type of light restrictor, like sunglesses.  There are also limits to how well we can see in the dark because we can collect only a small part of all the light that is out there.

Television cameras as have an iris, to allow them to shoot in a wide variety of light.  Their irises are, as shown, mechanical in nature and are adjusted manually or automatically by the camera based on algorithms that try to optimize the quality of the image.  If you’ve used high quality cameras, you’re familiar with the term ‘f-stop’:  The larger the number, the smaller the iris.  The f-stop (the f is for “factor”) is the ratio between the lens opening and the focal length of the lens.  That’s why f-stops come in such goofy numbers.  The area of the is proportional to the square of its radius.  When you increase the  the aperture by a factor of 1.4, you double the light.  (F-stops are usually 1, 1.4, 2, 2.8, 4, 5.6, 8, 11, 16, 22)

The figure below gives you an idea of how the iris changes the amount of light let into the camera.  The numbers at the bottom are the f-stop values.

The iris on a professional television camera can open way, way up and make it look like it is a lot brighter than it actually is.  It’s simply gathering more light than it would if the iris were at a normal setting.

Twitter was abuzz during the Talladega race with people asking why the drivers were complaining about the lack of light because their television picture looked just fine.  You can’t judge the amount of light from a television picture because the television camera is always optimizing its settings to give you the clearest picture.  You have the same issues with still photographs – how light or dark it looks depends entirely on the setting on the camera or phone.

What I thought was odd were the varying evaluations from the reporters who were actually at the racetrack.  Some were saying there way plenty of light, while others were asking how NASCAR could even think of re-starting  the race given the darkness.  The folks I would really like to hear from are the spotters because if they can’t see their cars, that’s a disaster waiting to happen.

Just for the record, driver reports are similarly unreliable due to a psychological effect that makes you think it’s too dark if you’re leading the race.  If you’re not in P1, the light looks just fine.

Incidentally, installing lighting at Talladega is a tens of millions of dollars project.  Maybe not what a track is able to do given the struggling economy and sagging ticket sales.

NOTE:  As Allen Lee (@wxguy) points out, the CCD (Charge-Coupled Device) – the thing that acts like the retina in your eyeball – is also more sensitive than your retina.   You can read more about CCDs in an article I wrote for Cocktail Party Physics awhile back.

The Physics of NASCAR