Here’s the fast analysis of the statement from NASCAR upholding the penalties on the 33-car from New Hampshire.  More will follow after proper digestion and reflection.  This is an interpretation of the penalty upholding statement (as reported by Jeff Gluck) because that’s the first tweet I saw.  The panel’s statements are in italics and my interpretation in non-italics.

The Appellants did not contest that the car measured out of specifications upon inspection. RCR agreed that NASCAR’s measurements of the car did show that the car was not in compliance after the race.

The Appellants argued that, having received a warning about the car body of the #33 car being “too close” following the Richmond race, that it was inconceivable that they would bring a non-conforming car to New Hampshire. RCR to NASCAR:  We’re not stupid, folks.  We knew you wanted to see the car, we knew you thought we were hitting the edge of the acceptable with the Richmond car.  We’re not going to try to get away with anything.  OK, that’s an argument we all sympathize with, but how do you prove it?  I wonder whether RCR presented any data from measurements of the car prior to it leaving the shop.  Then again, remember Gary Hart daring the media to catch him in illicit activity?  This isn’t really a scientific argument, it’s an article of faith.

They argued that the left rear frame member was actually bent upward as a result of the car being pushed towards Victory Lane by a wrecker after the post-race burnouts, which resulted in the left rear measurement “hard point” being too high. To this end, they also presented an accident reconstruction specialist to demonstrate that a wrecker might bend up the left rear strut in the trunk under certain conditions. The specialists, however, indicated that such an occurrence would strictly affect the left rear because of the match-up between the wrecker pushbar and the angle of the racecar’s rear bumper. He went on to say that the corresponding right rear measurements should not be affected, in his view, nor the frame member deformed as a team representative had alleged.

This is a very interesting statement.  A ‘hard point’ is a point on the car that is specified as having to be in a certain position.  It’s like me telling you that you can sit any way you like, as long as you keep both feet on the floor.  Feet on the floor is a ‘hard point’.  You can do anything with your hands and legs, but I’m declaring you illegal if you don’t have your feet on the floor.  When they talk about the frame, they’re talking about part of the chassis, usually the part made with rectangular tubing (as opposed to round tubing).

On the photo at right, the rear is pointing to the right.  The frame is the square part; however, that’s connected to the round tubing that supports the rear bumper and the gas tank.

According to NASCAR’s statement:  The accident specialist argued that it was possible that the tow truck might bend the left rear strut in the trunk.  I can’t tell from that exactly which part of the car they are denoting.  The next statement, however, says that ‘the specialists’ (one has to assume they mean the RCR specialists, not the NASCAR R&D specialists) said that this would ONLY AFFECT the left rear bumper and NOT the right rear bumper.

The panel then goes on to say that the specialist contradicted the team’s claims and that the team claimed that they left AND the right measurements should have been affected. I haven’t seen the tape on this, but given the frustration of the specialist reported by the folks who were there when RC came out (“they didn’t listen to anything I said”), this is a really curious piece of information.  The panel thinks there was contradictory evidence presented.  Does RCR?

The Appellants also contested the severity and timing of the penalty. Well, yeah, you sort of have to.

Claims that the wrecker caused the infraction were negated by the telemetry from the car which did not show a sharp impact spike; by the fact that the rear template still fit snugly across the entire rear of the car; by a visual inspection of the rear of the car which showed nothing of note in the way of damage; and a visual review of the videotape of post race assistance tendered by the wrecker which appeared as relatively gentle pushing.

This is is important because of the reference to hard data.  A ‘sharp impact spike’ would be a peak on a graph of force (or acceleration since F=ma) as a function of time.  The panel asserts that there was not a significant enough spike to cause the damage. 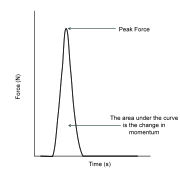 I’ve shown such a spike at left.  This is the same type of data you’d use to determine how hard a hit a car took in an accident.  The accident reconstructionist should have been able to provide some data about the size of the force necessary to bend the strut. The panel believed the force that was shown on the ‘black box’ wasn’t enough to cause the offset.

The rear template still fit the car, which suggests that there was minimal change in the shape of the body, and that was supported by looking at the car.  If I came to you and said that someone had hit my car with a baseball bat, you’d have a certain expectation for what type of damage that would cause.  If that damage weren’t there, you might be suspicious about whether the baseball bat incident actually happened.  The panel also looked at the video tape and found it to be consistent with the damage and the telemetry, which led them to conclude that the force of the tow truck wasn’t sufficient to cause the change in height.  The panel is arguing that the probability that there was damage significant enough to throw off the measurement, but not significant enough to see or be indicated by failure to fit the template wasn’t large enough to be convincing.

Of significance to the Panel were some additional facts which came to light during the hearing. Particularly of note were the facts that both rear hard points, left and right, were high, and that the rear of the body was offset on the frame.

They’re re-iterating here that the car was high on the left AND right sides and, according to their interpretation of the RCR specialist’s testimony, the tow truck explanation would result in only the left side being high.  They also noted that the rear of the body was offset on the frame.  This is a cryptic comment because it doesn’t tell us whether it was left/right offset or up/down.

The Panel found that the penalties were consistent for infractions of this magnitude.

Therefore, it is the unanimous decision of the National Stock Car Racing Appeals Panel to uphold the original penalties.

I’m not saying anything here about whether I think the conclusion is valid or not – just trying to explain what I think the panel means.  I’ll be on Sirius Speedway with Dave Moody Thursday at 4:40 EDT to talk about the situation.

If I were a NASCAR reporter, here are the questions I’d want answered, either by RCR or by NASCAR R&D and ideally by both.

1.  Here’s a picture of the chassis.  Which frame member(s) are the ones that would have to have been bent by the tow truck?

2.  Did the RCR accident reconstruction guy (a very respected engineer, by the way) actually contradict what RCR said or did the panel misundertand what he was saying?

Is this really a story?   I don’t understand how RCR could have taken the chance of bringing a purposely wrong car, especially one off by that much.  I also don’t understand how the damage could have happened at the track.  It might be as simple as someone having measured wrong at the shop.  But science is about understanding WHY.  Most importantly – it’s about understanding, not accepting what you’re told or basing your conclusions on which team you like best or your gut feeling.  For some people, the story is over, but other people really want to understand how this could have happened.  Personally, I don’t want to read any more stories about why Junior is running badly, hear from drivers who can’t speak more than three words without cussing (especially at people who are just trying to do their jobs), or hear that Danica has (still) not mastered the art of driving a stock car.  If you’re not interested, don’t read the articles, but don’t belittle those of us who find the nerdy tech stuff interesting.   It’s our NASCAR too.

Buy The Physics of NASCAR at: